Yes becoming a shadow of somebody else is not an easy job, though we often say that this person is a  shadow of him! So I am writing on the prompt- Imagine you are someone’s shadow for a day. 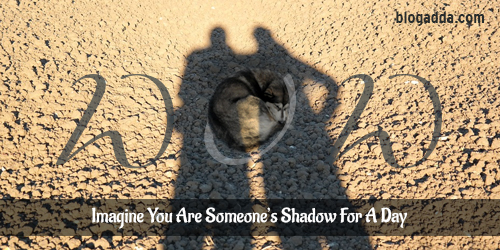 We find that when there are elections, news reporters often cover some political star campaigner during his or her campaign for a whole day.

There could be stars in every walk of life, yes some politicians also have been such, some might be there at present also, but there are more chances of finding such star material, who deserve to make people their shadows, in the field of art. We could say the artists like- Ghulam Ali Ji, late Jagjit Singh Ji, My all time favourite immortal singer- Mukesh Ji, and so many!

There is an old Hindi film song, sung by Lata Ji-

There is another song sung by Sachin Da-

Such explanations would continue, I would now like to share my dream, my imaginary day spent with my favourite producer, actor, dreamer and dream merchant- Late Raj Kapur Ji.

Yes for this experience of my life-time, I had to travel back in time. It was the time when the mega movie produced by RK-  Mera Naam Joker had failed on box office for the time being, making him almost bankrupt and he was busy working on his another dream, throwing a challenge before others to let them make it flop!

Yes, I do not know how, I reached the doorsteps of RK early in the morning, he had just got up after sleep from the mattress lying on the floor. I had heard from somebody that he did not sleep on a cot as he fears of falling down! May be all people who rise to such high levels have such fear virtually!

Anyway I was his shadow for the day, as I was invisible and I could move with him whenever I wanted, for that full day! When RK Ji got ready after breakfast, I was ready to accompany him. On reaching RK studio he stopped at the small cigarette shop (Gumti) took a packet of cigarette, one Pan Bahaar and one Tulsi Jarda packet, which costed at that time around Rs. 30/-, gave a 100/- note and left the remaining amount with the seller, as usual. (Incidentally I have met that seller later, when he left the place after the death of RK and came to our area).

The work of story sittings, selection and composition of songs for his next film Bobby was in full swing at that time, though he was running short of funds and his friends were ever ready to help him, but he was not taking any help.

He kept meeting various artists, technicians, writers etc. for producing Bobby as early as possible. At noon his present and ex- team members, his friend for life time-Mukesh Ji, whom he considered like his soul, the great writers, poets- Shailendra Ji, Hasrat Jaipuri Ji and also Neeraj Ji, Music directors like-  Shanker Jaikishan Ji,Laxmikant Pyarelal, I think one of the duo who  survived till then were there, Kalyan Ji Anand Ji, and so many came to meet him, console him. They were not all working together at that time but they were great friends and wanted that this great showman of India should not feel dejected or defeated. He was the hope of the film loving community, those who dared to dream.

It was a long-long meeting, these great people shared with each other how they had worked on great projects starting from – Aah, Aag, Awara, Chhalia, Sri 420, Jis Desh Me Ganga Bahti hai etc. etc. Each one of them also talked with respect about the contribution of others present there, in making those grand projects immortal, though some might not have been hit on box office.

Raj Kapur saaheb also talked about his lovely heroines and their contribution in making him what he was now. He also said that through this film- Bobby, he would also re-live his romances to some extent, through Rishi Kapur actually.

It was a great thing to see all of them together, some of them drank also and after drinking, their deliberations were much more serious and lovely. It was a great dreamy gathering and discussion of such great  people, which continued till late in the evening. A person like me could only dream to be a part of such a gathering, and Of-course  it was a dream only.

What should I say now! I salute the great showman Raj Kapur Ji and all others mentioned in this narration.

Raj Kapoor, a nice person to follow. So many things to learn. So many gossips to hear.