This is weekend time and almost every weekend there is time for me to write based on two prompts, this is the second one. 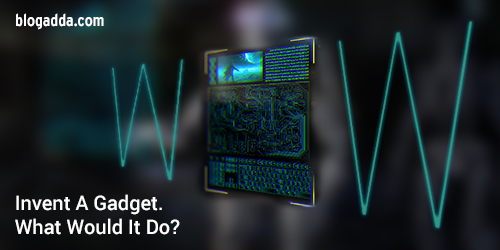 Yes this time we have to write on, ‘Invent A Gadget. What Would It Do?’ and yes it is ‘WOW’ prompt on BlogAdda.

I remember that I had once got a chance to have discussion with famous Hindi novelist and story writer-‘Late. Sh. Rajendra Yadav Ji’, whom we had invited for delivering a special talk before our people. Sh. Yadav was a handicapped person, some problem in the leg, he used an aid to walk. He said that since he can’t move fast, in childhood his liking had been of reading and watching suspense thrillers in which there were fast chases, speedy movements etc.

In my case the handicap is that now I do not drive. When I lived in Delhi or Gurgaon, it did not make much difference since there were metro trains, Now I live in Goa and here movements without self driving are a big problem.

So one thing that I would like to invent or get is such which would make me fly from one place to another. OK you find it difficult, then fix a flying limit of 50-60 KMs for one trip.

There are so many beaches and tourist spots in Goa, where I wish to visit and while living in Goa itself, I have not been able to visit most of them. I just want it to happen, that I stand in my balcony , spread my hands and my flight starts. Let me also become invisible during the flight so that people may not get disturbed without reason and after a few minutes I silently land at my destination, some beach or other tourist location in Goa, where some friend of mine might be on visit and I come back to my house in a similar way after spending some time there.

I also think of another gadget, similar type, for travelling but not mainly in space but in time.

I still remember the sad days of my childhood, the difficulties my father faced due to lack of money. I just wish I travel back in time to those days with money that I have today and change the plight of my father during those days. I know the difficulties of carrying money since currency notes have changed several times since then. So I could carry some gold with me, which could be converted there into money.
These are the two things about gadgets that I would like to get or invent and use.

‘This post is a part of Write Over the Weekend, an initiative for Indian Bloggers by BlogAdda.

7 replies on “A Gadget invention of my choice!”

Drones transporting people would be a reality soon. I can say so as the drones now have started delivering parcels. Sri Krishnaji, your wish to fly anywhere would see the light of the day in years to come!
As for going back in time and helping your father, I wish it does come true. It was a very touching piece.

Very interesting take on the prompt and ending is really a touchy…wish it would be possible.

A gadget to make one invisible can be a useful one. Nice thoughts.

interesting, to fly from balcony to beach.