I remember the title of the first part of the autobiography written by famous Hindi poet- Dr. Harivansh Rai Bachchan Ji, the late father of veteran actor- Sh. Amitabh Bachchan Ji. Dr. Bachchan wrote his autobiography in three parts and naturally the first part would include the incidents of very early life, which in many cases, one very faintly remembers so the title for that was- ‘Kya bhooloon, kya yaad karun’ (What I need to forget and what to remember). 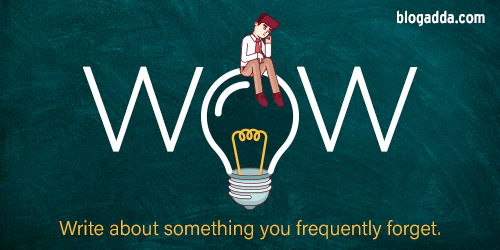 It is said that like any computer, humans also have limited memory-space, so one can’t remember everything and every incident that he had been through. Further like older computers, the memory status of older people also diminishes, so there is lesser and lesser RAM (random access memory) available. So being aged 68 yrs at present, I always have an excuse that I can’t remember everything, so I would remember only what I want to.

Yes, it is true that, one does not distantly remember all that happened in the past since it is not in fluid state as a memory, but it does remain there as a junk, like some lumps are formed. It is there, occupying some space but we can’t retrieve it.

Further it is very true that one distinctly remembers something in which he is very much interested. Like I remember the old songs of Mukesh Ji and other veteran singers, ghazals sung by various famous singers. Since it does occupy a considerable space, so problem of RAM (Random Access Memory) does arise for other things to remain there in retrievable position.

I am a retired person. When I was working, I never depended on my personal memory for attending to official assignments, achieving set goals etc.. I always kept notes for that. Now as a retired person, I only do a little shopping of daily use items, so there is no problem if I forget something, otherwise also main shopping is not my role, I am only a support person and it normally happens that I forget the item, which was the most important one to remember.

So you are asking what I forget! if I can remember it now, I would not have forgotten it that time, now I would not over stress myself by trying to remember back, what I had forgotten.

This is my humble on the prompt- Write About Something You Frequently Forget. If I am able to remember it back, I would tell later.