We just celebrated the 70th Republic Day of our great country India. Our Republic became 69 yrs old on 26th January, 2019. Our great leaders had made untiring efforts, sacrifices and as a result we became a free nation on 15th August, 1947 and after prolonged discussions we developed our great constitution and adopted it on 26th January,1950 and we became a sovereign republic, the biggest democracy of the world. 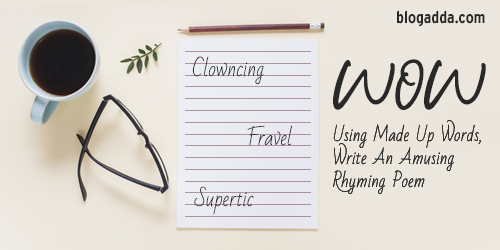 Today I would not give much ‘Gyaan’ , Just would share a small rhyming write-up, based on the prompt given this time under WOW weekly prompt on ‘BlogAdda’.

We are Indians, we have loveffaction for the world.
We feel happyjoyful to see everybody around happy.
But there are people, who enjoy hurting others,
Their nastyevil joy depends on pains of others.
They like the colorblood the most.
They aim to capture the world by killing humanity.
Cowards, they hit innocent citizens.
What virtue, what religion they want to spread.
Their days are gone, let humanunity kill all those-
Who want to kill humanity.
2.
Let us spread love
The spirit of democracy,
The message of our saints,
Thoughts of Gandhi Ji,
Films of Raj Kapoor.
Words of poet Shailendra,
Soulful voice of Singer Mukesh.
Let all sing-
‘Mera jutaa hai jaapani,
Ye patloon englistaani, sir par laal topi roosi,
Fir bhi dil hai Hindustaani.

This is in response to the #WOW prompt – “Using Made Up Words, Write An Amusing Rhyming Poem“.